Franchising has always been a topic for discussion here at Black Business Boost. For many aspiring business owners, franchising is a much easier way to get into business for yourself than starting on your own. A few months ago we discussed the story of Jonathan Lacy and how he became the first Black owner of a 7/11 franchise in the state of Nevada. Today I want to introduce you to Ashley Lamothe, who at the age of 26 because the youngest to ever own a Chick-Fil-A franchise. Ten years ago the Spellman graduate purchased her very first franchise. And hasn't stopped growing since.

Lamothe was selected to open the first ever location in Los Angeles. And I really want to highlight the significance of that. A widely recognized and beloved franchise like Chick-Fil-A trusted their first ever opening in such a pivotal city to a Black woman. A young Black woman at that. And then just a few years later, she was able to open her second location in downtown Los Angeles.

Her journey with Chick-Fil-A started many years before when she began working at one of the locations outside of Atlanta at the age of 15. It turned out that she liked the job, and when it came time to attend Spelman College, she began working at the Chick-fil-A restaurant near campus as a director on the leadership team. 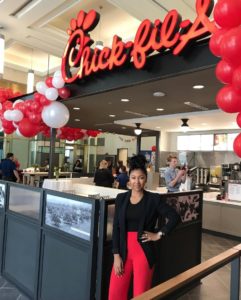 Ashley Lamothe, a graduate of Spelman University, because the youngest person to ever own a Chick-Fil-A franchise in 2011.

“At the time, I thought it was just a great job to have while pursuing my degree in theatre,” says Ashley. That was before her restaurant Operator pulled her aside to ask about her long-term goals. She also recommended that she pursue a career in leadership. She had never even considered it. But she is very grateful that someone was able to help her see her potential.

After considering the Operator’s advice, she adjusted her plans at school and switched her major to economics. This helped her to begin her pursuit to someday owning her own Chick-Fil-A restaurant. And in 2011 that dream came true just five years after she graduated from Spelman. After her graduation, Lamothe participated in the Chick-fil-A management and development program. Three years later, she achieved her goal of becoming a franchise owner. And since her original location was located across the street from USC, it only made sense that her second franchise would be located just up the street in downtown LA.

Today, she says what she’s most passionate about is pouring into her team. With her decade of experience as a franchise owner, Lamothe is now focused on creating more future leaders. Her mission is to help others obtain the same support that enabled her become a franchise owner. Lamothe continues to be a resource for individuals seeking to become a franchise owner. She serves on the Chick-fil-A Operator Support Council and provides tips on social media and her website.

And her hard work is definitely paying off. She was recently awarded the company’s Symbol of Success. This honor is reserved for Chick-fil-A Operators whose businesses experience particularly high sales growth. She has traveled all over the world speaking to women about economic empowerment. In 2013, she traveled around Europe delivering business education on behalf of Chick-Fil-A. A year later, she led one of the first female-focused business retreats for franchise owners.

Lamothe shared her best advice for other aspiring franchise owners with Rolling Out: “Gain work experience at a local restaurant. A lot of people say they want to own a franchise but have never worked in a restaurant. It’s hard, hands-on work and you really have to know what you are getting into.”

And to this day she remains committed to nurturing the future franchise owners of tomorrow. She is constantly sharing information through her website, her social media and speaking engagements to encourage the next generation of leaders.