Byron Allen Continues to Add to His Media Empire.

Byron Allen is one of the wealthiest Black men in entertainment today. The media mogul is the owner of 24 television stations in 20 markets. But this isn't where he plans on stopping. Allen has recently submitted a bid for TEGNA, a local TV news company that currently has 64 stations in 51 markets. He is the CEO of Allen Media Group and also owner of theGrio. He is now turning his sights to local TV news stations. Back in January, it was revealed that Allen Media Group had plans to invest billions into TV station groups in 2021.

His revenue model is simple, according to The Hollywood Reporter. Unlike most production companies, which charge networks huge fees to license their shows, Allen allows each network to license his shows for free. In exchange for this, Allen keeps the right to sell 50 percent of the advertising directly, which puts a larger chunk of money in his pocket.

In 2019, Allen created Allen Media Broadcasting. According to its website, their mission is “to build a television group by acquiring Number One rated stations, Big Four affiliates with strong local news operations targeting university towns and state capitals that are deeply ingrained in the fabric of their communities.”

When Allen was a kid growing up in Detroit, Michigan, he developed a passion for the entertainment industry. He started out his career as a comedian at the age of 14. He often went to Los Angeles, California, to perform at comedy clubs. During that time, Allen was invited by ex-Good Times star Jimmie Walker to join a comedian team. The team featured future late night megastars Jay Leno and David Letterman.

He then transferred from the comedy world to behind-the-screen, where he hosted TV shows like The Byron Allen Show and Entertainers with Byron Allen. Allen made his first business move in 1993 when he created Entertainment Studios in Los Angeles.

“Over the past year-and-a-half, we’ve invested close to $1 billion to acquire best-in-class, top-tier, broadcast network affiliates and we plan to invest approximately ten billion dollars to acquire more ABC, CBS, NBC, and FOX television stations over the next two years with the goal of being the largest broadcast television group in America. All of our media assets will work in concert to amplify our free-streaming service, Local Now.”

The Allen bid for TEGNA is reportedly $23 per share, which is higher than private equity giant Apollo’s all-cash joint bid with Standard General at $22 per share, per Bloomberg. Both Allen Media Group and Apollo had their eyes on TEGNA back in 2020, but the company dropped sale plans in late March of 2020 due to the uncertainty of the novel coronavirus pandemic. 2021, however, has been a strong year for the local TV space. TEGNA has received multiple acquisition proposals. 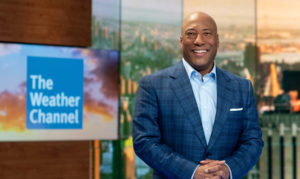 But don't think that his plans end here. He has been very vocal about his hopes to purchase news giant CNN. Allen told the Grio, “I have to buy AT&T to do that. And I will. Believe me. I think about it every day.” And even though it sounds like an almost impossible goal, Allen doesn't think so. He already owns The Weather Channel, which he acquired from NBCUniversal and Bain Capital. He also operates Bally’s Sports Group through Diamond Sports Group. Additionally, he acquired a number of television stations from Bayou City Broadcasting, another minority-owned and operated media group.

“Fox recently saw $2.4 billion in revenue while NBCUniversal saw just over to $2 billion. That’s why I’m buying TV stations, they’re a great business. You want to be in both national and local business. It’s good, smart diversification.”