If you have natural hair, then you already are familiar with some of woes that faced Ceata Lash. Many people with natural, kinky, curly hair want to have that hair-styling accessory that will not damage the hair. Some do improvise but Lash created one for herself and all of the natural folk out there. In doing so, she is the first Black woman to hold three patents for natural hair accessory products. And is on the way to a forth.

In 2013 Lash launched PuffCuff, a user-friendly hair clamp and unisex styling tool. You heard that correctly. Fellas can utilize the PuffCuff also. An industry disruptor, the easy to use accessory upholds curls and kinks without the tension and strain linked with elastic bands and other hair ties. Growing up, there simply wasn't anything on the market that could hold Lash’s thick and curly hair in place without tugging at it or causing breakage or knots to the hair. She combed many hair supply shops and searched online but the product just didn't exist. Soon, Lash realized other women and men in the natural hair community had similar complaints.

Once she realized this, Lash drew inspiration from her late grandmother and sprung into action. Her grandmother lived a life of no regrets, so Lash decided to do the same. The first product was available for purchase in February 2014.

“The PuffCuff Hair Clamp was developed from a simple idea: create a tool that not only makes it easy to achieve stylish looks without stressing your hair or causing pain but one that is sanitary, durable, and affordable too.”

The clamp definitely  became a hit in the beauty accessories industry. PuffCuff now has more than 115,000 customers globally. It is sold online by PuffCuff, Amazon, and Sally Beauty. Many independently owned foreign retailers sell it as well, including in Australia, the Netherlands, and Spain. PuffCuff is based in the Atlanta suburb of Marietta, but it is truly an international brand. As the brand's Creative Director, Lash oversees the creative, marketing and social media teams. Continuing to produce rich content and viable brand recognition. In 2018, she was awarded the President’s Innovation Award from Sally Beauty. And in 2019 she was awarded the New Voices + Barefoot Wine #WeStanForHer Grant.

Currently, Lash has ambitious growth goals. Wanting to build on the fact that she is the first Black woman to hold three patents in her industry, Lash’s aim is to build PuffCuff into a $25 million evaluation within the next five years. Her company’s current market value is $6 million. She is bullish that her firm’s value will appreciate greatly as it operates in the global haircare business that generates more than $85 billion in annual revenues and includes 65% of the world’s population with curly hair.

And she is able to think so big because of her patents. She has no competitors to rival her product. Lash says her patents have allowed her first market access but also made her a target. Her firm has spent more than $100,000 in legal fees protecting against copycats being sold in America. In the coming years, she is confident her firm will see significant increases in revenue. She expects the gain to come from multiple sources, including PuffCuff along with products/sub-brands under it. PuffCuff plans to launch a male product line. 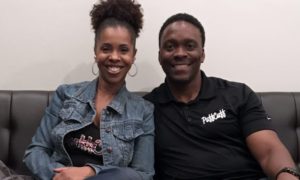 But there is one more thing. Remember earlier I mentioned that a forth patent is on the way? “I still have another patented product to produce that will address the needs of an even larger market segment,” Lash says. “And we have another initiative that I cannot disclose.”

Lash runs the company with her husband, Garrett Lash, who has been the CEO since 2017. It is the goal of the couple to build generational wealth for their families, according to Black Enterprise. The company also gives back to its community by donating to different organizations. Most recently they donated $3,000 to groups that fight systemic racism, police brutality and injustice.

She also noted that PuffCuff just ran a successful equity crowdsourcing campaign to help with some of its supply chain issues. it Next Lash plans to seek investors for future funding. And like other businesses, PuffCuff has had ups and downs from the pandemic. Some of its employees tested positive for Covid-19 and major shipping delays occurred. Due to the pandemic, PuffCuff got two SBA loans for the first time ever. This was pivotal for the company because it allowed the business to refrain from laying off any of its employees. “Also, whole families were at home letting their curls grow,” Lash says. “2020 was the year for e-commerce growth.”