Growing up in Philadelphia, Trey Brown knew at a young age that violence was consuming his city. It's easy to turn to crime when the options are few. He also knew that he didn't want himself or any of his friends going down that route. Young Trey was able to find an alternative path through fashion. Starting at the age of 13, Trey took $178 of his birthday money and began what is now a fashion empire. Trey used that money to purchase 16 tee shirts. Selling them at local Philly barbershops, SPERGO was born.

The name SPERGO is a combination of “Sports”, “Heroes” and “Go Getter.” One of Trey's biggest heroes is the living definition of a go getter. Sean “Diddy” Combs is one of his biggest inspirations and helped fuel his desire to be a 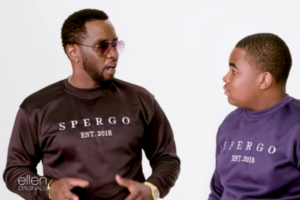 Diddy surprised the young CEO with a $25,000 grant on the Ellen Show.

business owner at such a young age. Trey spoke about what an inspiration that Diddy was to him while he was shooting a social media promo vid on the Ellen Degeneres Show. That's when a huge surprise was sprung on the young entrepreneur. Diddy himself came out and greeted Trey. Diddy then further surprised the SPERGO CEO with a $25,000 grant. The grant was the  first ever Black Excellence Entrepreneur Grant.

At this point, Trey has become his own hero. He has been able to hire on his friends and give them another option as well. “I created SPERGO to give myself and my friends another option. SPERGO keeps me busy and off the streets. Last year, I was able to hire four of my friends and my brother at the Odunde Festival, and it felt so good to give them an opportunity to make money while doing something positive.”

Aside from giving his friends an alternate opportunity, Trey has also changed his mother's life. Just after 8 months, Trey retired his mother. Well… that's a little misleading. He more so gave her a career upgrade. Being a former teacher, she is now Chief Operating Officer of SPERGO. She handles contracts, transportation, and any media requests.

Using the grant money from Diddy, Trey was able to invest in an actual brick and mortar location for a store. This Philadelphia location has a store front on the main floor, with office spaces above and a warehouse for housing product below. But that isn't the only SPERGO location. Just a couple months ago, he opened up his second location. This one is located in Washington, D.C.’s Pentagon City Mall. Trey is really showing amazing staying power by expanding in the midst of a worldwide pandemic. And it is also a testament to his work ethic. Trey reinvested 100% of his earnings early on in order to ensure that he maximized his efforts in growing his brand.

The teenage CEO has gotten stamps of approval from megastars Ellen and Diddy, but the SPERGO brand is also affiliated with the home town Philadelphia 76ers. Trey signed a partnership deal with the 76ers Buy Black Program. Trey's clothing has also been worn by plenty of stars. Not only across Philadelphia, but all over Instagram as well.

“I started SPERGO three years ago, and I would never have imagined that I would be officially stamped a 76ers partner by my home basketball team.”