The highly anticipated Disney+ series “Falcon and the Winter Soldier” arrived Friday. After over a year of Covid setbacks, the story of Sam Wilson and James Barnes finally hits the popular streaming service. The show focuses on the lives of the two former soldiers returning to normal life. In the aftermath of the Infinity Saga of the Marvel Cinematic Universe, Sam and Bucky attempt to return to normalcy. Slight spoiler warnings for the Avengers films and the first episode of Falcon and the Winter Soldier in the following two paragraphs.

Bucky is shown dealing with some obvious PTSD issues. Barnes is having nightmares and speaking to a shrink about his time as the Winter Soldier. But Sam's issues after returning home are where I would like to focus. Before becoming an Avenger, Sam Wilson was a soldier serving his country just like any other. In his time as an Avenger, he fought against enemy combatants, terrorists, hijackers… and oh yeah, an alien invasion that literally threatened all of existence as we know it. Upon returning home, Sam is shown having a discussion with his sister about the family business and the finances. The business is failing, and his sister can no longer handle it. She has exhausted every avenue she has available to her, including turning to the bank for loans.

As any good brother would, Sam suggests that he should apply for a loan. As a soldier and war hero he expected to be treated as such. So Sam turned to the financial institutions that he risked his life to preserve. I'm sure you know where this is going. As Sam's sister expected, there was no special consideration given to him for being a war veteran. The bank manager even recognized him as an Avenger and asked for a selfie with him.

Yet after risking his life, well technically after actually losing his life, the Black war hero returned home to an America that reminded him that he was still a second class citizen. When he asked about the SBA loans that he should be eligible for as a military man, he was told that he did not qualify. I can't help but think of the correlation to our real life Black soldiers returning home from war throughout the 1900's and the hardships that they faced.

Black soldiers returning from the war found the same socioeconomic ills and racist violence that they faced before. Despite their sacrifices, they still struggled to get hired for well-paying jobs, encountered segregation and endure 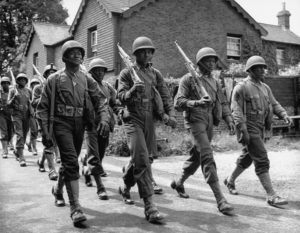 d targeted brutality, especially while wearing their military uniforms. Despite being recognized as heroes, they were no recognized as heroes. Black veterans realized that being treated as equals was still a matter America simply was not ready to embrace. After fighting overseas, Black soldiers still faced violence, segregation and economic discrimination at home.

Black soldiers emerged from the war bloodied and scarred. Nevertheless, the war marked a turning point in their struggles for freedom and equal rights that would continue throughout the 20th century. And as we can see every day in the media, it has now followed us into the 21st as well. White supremacy tested the patriotism of Black soldiers returning home from war. The painful reality was that after returning home from fighting, they returned home to another fight.

Being Black in America is already enough of a struggle to find business starting opportunities. Add into that struggle the burdens that come along with being a soldier and you are doubling down on the hardships of business ownership. I admire Marvel for using the platform like this. In order to highlight an issue that has been a plague on our community for well over a century now. And it is only fitting to use Sam Wilson as the hero that will tackle this social issue. Falcon is the first Black American comic book hero.

Thankfully for our men and women who serve our country, the times aren't as lopsided. When our soldiers returned home from WWII, Vietnam or even Korea, it was hard to find opportunities. To commemorate the struggle of Falcon, we have amassed a list of resources that are geared toward veterans and minorities. Below is a list of lenders that take aim at helping our Black soldiers who want to be Black entrepreneurs.