If you have been following Black Business Boost in the last year, you've seen a couple of recurring themes. Black woman have been leading in entrepreneurship and franchising has been booming for Black people in general. And Jade Ashley Colin follows right along with these themes. In 2016 she became the youngest Black woman to ever buy into a McDonald’s franchise. New Orleans native began her career with the Golden Arches while attending the University of Louisiana. The daughter of McDonald’s franchise owners, Colin was already familiar with the business. Her entrepreneurial parents who purchased their first McDonald’s franchise in 2010. 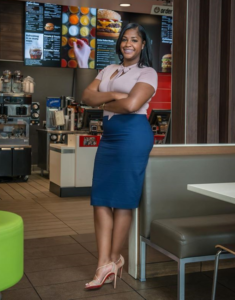 Jade Ashley Colin, the youngest Black woman to ever own a McDonald's franchise.

As a result, after graduating with a degree in business management in 2012 and McDonald’s intensive Next Generation training program, she became a manager of the family franchise. After finishing that intensive two-year training program, she became a manager of her parent's franchise. She immediately began planning to open a franchise of her own. In 2016, at age 26, Colin made history. Despite her falling into her passion unexpectedly, Colin worked hard and shared advice on those looking to do the same. For as long as she can remember, she has been an independent spirit.

“As an African American community, we need more men and women to know that it’s not just about right now, but it’s about the generations to come.” – Jade Ashley Colin

Colin firmly believes in helping others, and she gives back to her community whenever she can. She even mentors her employees to finish high school and pursue entrepreneurship. In addition to ownership, Colin provides job opportunities for Black people, supports local organizations in their efforts, and has served free meals to first responders and medical personnel during the pandemic.

When Colin became the owner of a McDonald’s in 2016, she actually set another landmark as well. She is the youngest Black woman to own ANY Fortune 500 company. And her parents aren't the only entrepreneurial influences she received at a young age. At 16, she worked for Smoothie King. It was owned by five partners. And they imparted things in her that she didn’t yet understand. For example,  the importance of meeting yields on the products, counting inventory, making sure the money is deposited, and so on. She even spoke to her parents about opening her own Smoothie King.

Her mother actually told her that pursuing a career as a CPA would be a great choice. And Colin considered it while studying for her degree in Business Management. And it was then she began to understand everything the owners of Smoothie King taught her. She even returned one day to Smoothie King just to tell them that she appreciated their lessons.

And her parents didn't just instill an entrepreneurial mindset onto her. Financial literacy was something that was always a lesson in her household. Financial literacy and generational wealth are absent in our community. And her parent's knew that. So they would established early on that knowledge and application in finances were important to be successful in life and business. This is one reason that she strives to impart these life lessons onto others. When you work for Colin, you don't just gain an employer. you also gain a life coach. 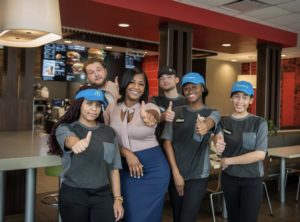 Colin with a few of her Louisiana employees.

Our communities don’t have many people to look up to. As times change and social media is becoming the platform to make life look “easy,” the fact remains that it is not. You have to become an expert at something. You have to know the background of how to get where you are trying to go in life. So Colin wants to teach her employees to become better. Especially the women. The importance of paying your bills on time, how to handle business, becoming a young professional, holding a conversation, and more. These are just some of the life lessons that she instills into her employees. It actually surprised her the things that people did and did not know. She believes that most people want to know, they just need the encouragement from someone who truly wants to see them succeed.