Less than three months since it was reported that Kanye could possibly be the richest Black man of all time, the first piece from his much anticipated Gap partnership has arrived. Forbes declared the multitalented artist as an official billionaire in 2019. But an article published by Bloomberg Media earlier this year, insisted that Kanye's Gap deal valued him at over 6 billion.

This figure includes West's Yeezy clothing and shoe deal with Adidas and Gap. The investment bank UBS valued at $3.2 billion to $4.7 billion. Bloomberg also estimated that West has $122 million in cash or stock, along with a $110 million music catalog and $1.7 billion in other investments. Sales of Yeezy's Adidas sneakers grew 31% during the coronavirus pandemic. The annual revenue hit nearly $1.7 billion last year, netting West $191 million in royalties.

Forbes actually pushed back against the article and explained that the number estimates sales that did not yet exist.

“Reports that the celebrity is worth nearly $7 billion are based on the magical thinking around sales that don’t yet exist. This is why he’s currently worth less than one third of that.”

Well, now we finally have a peek at what Kanye's GAP collab looks like. On Tuesday, Ye dropped his first Yeezy piece to the masses. A powder blue puffer style jacket called “The Round Jacket” sold online for $200 on the Gap's website. Gap posted a silent video with no caption Tuesday on Instagram. The image of a floating baby blue puffer jacket against an all-white background introduced the world to the Yeezy Round Jacket. 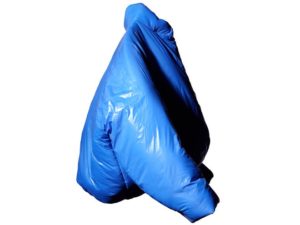 The jacket, which was released on the Chicago rapper's birthday, sold out in only a few hours. People lucky enough to grab a jacket will not see their purchase until fall, according to a press release. The high demand caused some users to be shown a sold out message. Others were directed to the waiting room, according to Yeezy PR consultant Tamara Choksey.

It is unclear when more pieces will release from the line. It seems as though the company wanted to use this surprise launch to gauge excitement around the much anticipated launch. It's very clear that Gap has very high hopes for the collaborative effort. The partnership is supposed to be a 10-year agreement, with Ye expected to receive royalties and possibly receive equity based on how much it sells. Gap has not disclosed any other financial terms of the deal.

This is the reason that Bloomberg estimated Kanye's net worth to be higher than Forbes. And if launches like this continue, it's feasible to think they were right. It was not reported how much inventory was actually sold Tuesday, just that the items were sold out.

I'm happy for Kanye. Most of us forget that he was an employee of the Gap years before Jesus Walks was blaring through our speakers. We also forget that Ye told Vanity Fair in 2015 that he wanted to be the creative director of the Gap. To go from regular ol' hourly employee to achieve the dream of selling $200 puffy jackets in the middle of summer… I would personally call that a win.

Gap shares were up nearly 3% in premarket trading. The stock has gained nearly 130% over the past 12 months. It has a market cap of $11.8 billion. Kanye is often in the headlines for his quotable missteps and his wild rants. Yet he seems to continually be on the right side of monetary wins. Is Kanye crazy? Or is he a genius? Personally, I think it's a bit of both.