Keba Konte, the Founder of Red Bay Coffee, is Truly a Revolutionary

I would consider myself to be a coffee aficionado. That is, if you consider drinking minimum two cups a day makes me one. I try to be frugal and just sip at home, but I'm not one to shy away from those mega coffee shops just like the rest of us. Although personally, I think gas station coffee is killer when compared to Starbucks. I always grab a nice Colombian, or maybe a fresh Brazilian roast. I've always felt those have the most flavor and “pick me up” power. Obviously the best coffee comes from South America, right? The thought has never even crossed my mind that great coffee might come from, oh I don't know… the birthplace of all civilization.

Keba Konte didn't begin his journey with a passion for coffee. But he has always been passionate about revolutionary moments. Konte grew up in the Haight-Ashbury district of San Francisco in the 1960s. He was the child of an interracial couple. His mother was a photographer, and his father was a carpenter with a background in philosophy. He wrestled at San Francisco State while studying photojournalism. Then in 1994, Konte went to South Africa to cover the country’s first all-race election. That's when he photographed the newly elected president, Nelson Mandela.

The Bay Area native was also in Washington DC for the Million Man March in 1995. Oh ,and let's not forget that in 1992 he went to Cuba. And this was before it was really open and photographed. Konte was there for a few weeks during a seminar studying the African influence on Cuban culture. But of course there were a lot of local issues as well. He even had the opportunity to photograph Fidel Castro. 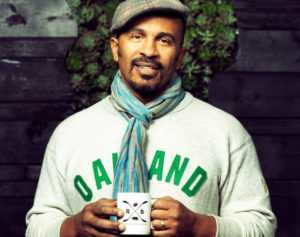 It wasn't until the mid 2000's when his coffee journey began. Konte was part of a San Francisco artist’s collective that opened Guerilla Café in Northern Berkeley. They hosted art shows, and were the first cafe to serve Blue Bottle Coffee. At that time, Konte didn’t know much about coffee. But after opening a second cafe, Chasing Lions, he began to feel uncomfortable with the “colonial” breakdown of the specialty coffee industry. The farmers were primarily people of color. They are doing the hardest labor and getting the smallest cut. Meanwhile, the roasters and coffee shops were run by young white hipsters and were pocketing the lion's share of the profits.

This is when Konte built a “garden room” off his garage in the Fruitvale section of Oakland. This is where he started roasting beans. Konte is self taught, teaching himself from YouTube videos. A year and a half later, in early 2014, he founded Red Bay Coffee. Konte was determined to employ an “anti-hipster cast of characters.” He hired people of color, people with disabilities and formerly incarcerated people. Women make up 65 percent of the company’s leadership positions. For that, and the quality of their coffee, Red Bay has built a passionate customer base.

Yet in still, his coffee passion never began due to a love of coffee. To be quite frank, he was just looking for somewhere to display his art. He was already established in his career in visual arts and photography. he had been traveling the world but was also very entrepreneurial. So as an artist, Konte created a lot of his own galleries and events. That is when he got the offer to take over an old diner in North Berkeley. The entrepreneur in him thought, “well, that would actually be a great place to have a gallery.”

I personally have been an avid coffee drinker for several years now. And I had no idea that literally every sip holds a connection to Africa due to the history of the global drink. One centuries-old legend traces the discovery of coffee to an Ethiopian goat herder named Kaldi. The story tells how he learned about coffee’s energizing effects when his goats stayed awake after eating berries from coffee trees. Kaldi took his findings to a local monastery where the abbot made a drink with the berries. Over time, the world fell in love with coffee.

“This is really something that we should own and be at the forefront of because this is our heritage and our inheritance,” says Konte. He found a certain irony in the origins of the drink and Black Americans initially being left out of the modern-day specialty coffee culture. And that's where his true passion resided and decided to do something about it. “I believed that I had the experience, skills and passion that could connect the underserved community and this global commodity to create something special.”

Once the demand for the roaster’s products could fill a shipping container with coffee beans, Konte resumed the passion for travel that took him to African and Latin American countries as a photojournalist. Now Red Bay imports about 300,000 pounds of green, raw coffee beans directly from growers, including the son of the legendary baseball great, Jackie Robinson. “One of the first direct trade relationships was with David Robinson of Sweet Unity Farms in East Africa. We met in New York, and his coffee was fantastic. We hit it off, and Sweet Unity Farms has been our largest single trading partner since then until today,” Konte explains.

Sweet Unity Coffee in Tanzania is not the only African farm that sells coffee beans directly to Red Bay. The company also has a relationship with a coffee co-op in Burundi controlled by women. Their coffee beans are used in the Motherland collection. Konte also developed a relationship with La Ceiba farm after making connections through a Guatemalan church in Fruitvale. “We saw that it had potential, so we worked with them to improve the coffee a couple points. We started to buy their coffee. They tripled their income by working with us,” says Konte.

The grower’s neighbors in Guatemala were also being exploited by middlemen. The following year they joined the coop that sold all of its coffee to Red Bay. “That’s another example of how a direct trade relationship can help elevate the lives of coffee farmers,” Konte adds.

How did Red Bay respond to the pandemic?

Before the coronavirus pandemic splashed down in 2020, Konte had plans of expansion. Red Bay was looking scale their business to Los Angeles by establishing a new Public Roastery there. Along with another revolutionary idea, they planned to have a couple of mobile coffee vans. There were also plans for three new cafe retail operations slated to open in San Francisco. But then, the entire world just stopped in its tracks.

“Within hours of the NBA announcing they were going to cancel their season, all of the tech companies sent their employees home. About 60 percent of our business was in office coffee service.”

When your business is predicated on people going out in public and gathering in a small shop with hand to hand transactions and also going to work and brewing up in the break room, a nationwide pandemic throws a serious wrench in your business model. Red Bay serviced top technology companies in the San Francisco Bay area, including Twitter, Facebook, Instagram, Airbnb and more. Konte temporarily closed all of his coffee outlets as sales plummeted. Luckily, the plans for the mobile van were already in the works. 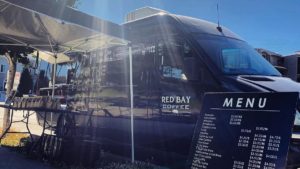 Konte put out video messages on social media and promoted the mobile van to connect with customers. Once the pandemic hit he was forced to close the retail shops. They moved to quickly complete and launch the van. Red Bay was able to get it out by early April when most other coffee retail shops were still closed. It played an important role in increasing revenue when we needed it the most. The calls for consumers to support businesses hurt by the pandemic also moved Red Bay toward recovery. The van also helped build brand awareness. Another positive that came from negative, was the outcry to support Black businesses after the nationwide protests of the murder of George Floyd (among countless other senselessly murdered Black Americans.)

Once Red Bay’s staff shifted focus to online purchases, those eCommerce sales skyrocketed 350 percent in 90 days. With a workforce reduced from about 63 employees to eight, Konte had to upgrade the company’s packing and shipping technology to keep up with the new sources of revenue. “People were already getting used to eCommerce. We were on Oprah Winfrey’s Favorite Things list. That culminated into a pretty high-powered eCommerce holiday season for us.”

As an employer, Konte is glad to report the company has been able to increase employees again to 44 and is looking to add more. As pandemic restrictions lift, and Red Bay locations expand, Konte remains committed to diversity. His commitment to inclusiveness in hiring practices gives people of color, women, the formerly incarcerated and applicants with disabilities opportunities to join the specialty coffee industry.

“I believe every business is a reflection of the owner’s and the founder’s values. No matter what I decided to do, it would always be anchored into my values of inclusivity and giving people a second chance.”