The criminal justice system was founded as a means for people to pay their debts to society. In theory, one commits a crime, one is tried and convicted of said crime and then they are sentenced. Whether it is prison time, community service, probation or restitutions, once the sentence has been carried out, one should be able to return to society and be accepted once again. However, this is not the case by any means. Just ask Cincinnati business owner Troy Parker.

Once you become a felon, becoming a respected human citizen once again isn't so easy. It is difficult to find employment, housing and ultimately… help. Not only can you lose many constitutional rights, you can use aid that is offered to those in need. Parker can attest to a number of these first hand.

Parker spent 7 1/2 years in prison for bank fraud. In prison he saw how many people, especially Blacks, left and came back. They would tell stories of how they couldn't get housing or a job, so they went back to crime. Or maybe started using drugs. But in prison, Blacks were running everything.

“From the kitchen to the boiler — remodeling, painting, asbestos removal. So my idea was to have a company that hires returning citizens. In the lower-income community, there's people who have mental health issues, or convictions, or who struggle with addiction, but they can still work. I wanted to remove the obstacles that keep those people out of the workforce.” 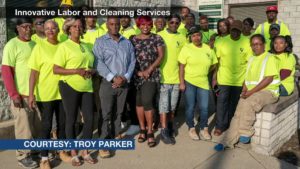 Troy spent the majority of his time behind bars envisioning the business that he would begin once he returned to society. After leaving prison in 2015, Parker began working on and founded Innovative Labor and Cleaning Services. And he’s remained true to his promises ever since.

“If you don't have transportation to the job site, we provide it,” Parker says. “If you don't have boots to start working, we’ll give you the boots and take it out of your first paycheck. Most people who returned from prison or come out of rehab have mental health appointments, substance abuse appointments, PO appointments. So we make the schedule flexible. We’re not really a second chance company. We’re more of a third, fourth, fifth chance company, because many people come here and aren't willing to change at first. They'll leave, but four months later they come back and their attitude is a little different.”

By the end of 2019, the company had 120 employees. Parker was still operating on thin margins. Doing everything he could to make payroll. He even had to turn down jobs due to cashflow issues. But pushing forward, the company made over $2 million in 2019. Then, in March, the pandemic hit. Right away, Parker applied for the PPP and the EIDL loans offered to small businesses as part of the CARES Act.

He was told he didn’t qualify for either. The SBA’s PPP rules disqualified anyone convicted of a felony in the last five years, or anyone on parole or probation. At the time, the SBA was automatically rejecting EIDL applications for business owners who had been convicted of ANY crime in the last ten years. As well as anyone who had EVER been convicted of a felony. Because Parker’s conviction was a felony, and he had six months left of probation (out of five years), he was ineligible for both.

“It was frustrating. But I can’t say that I was totally let down,” Parker said. “The number of times I’ve heard ‘no’, it’s almost like, you know, I thought it was my name.” Parker didn’t greet this news with a shrug. He wrote emails, he made calls, he connected with other business owners with criminal records. He connected with Ohio Senator Rob Portman (R), who heard Parker out. And in turn said he would write a letter on Parker’s behalf to President Trump’s staff and the SBA. Parker also got in touch with Ohio Representative Steve Chabot (R) and Senator Sherrod Brown (D).

Across the country, bipartisan advocacy groups and politicians began voicing opposition to the SBA’s restrictive rules for small business owners with criminal records. They pointed to the fact that these business owners had paid their dues. As well as their debts to society. Plus, they were now playing a vital role in fighting recidivism, since many hire other people with criminal records who often struggle to find work.

Senator Portman was particularly keen on advocating for Parker. And incredibly, a week before the June 30 PPP deadline, the SBA agreed to change the rules. This change made parole and probation no longer a disqualifying factor (unless the parole or probation started in the last year). Even with the rules changed, there were a shocking number of bureaucratic roadblocks and hoops to jump through. But Parker was able to get his PPP application in at the actual final hour. He eventually received both the PPP and EIDL loans. With that money, he’s been able to bring back many old and new employees. Plus, he’s been able to start taking jobs they couldn’t before due to cashflow concerns.

Troy's story is one that we all can learn from. If you are currently a business owner or hoping to become one in the near future, persistence is very key. You will be told no. You will be denied. And ultimately you will be given a BS reason as to why you don't qualify. As a Black man, Troy was already behind the preverbal 8-ball. As a Black felon, there was little to no hope that he could be successful. Parker isn't only a success and inspirational story to Black business owners, but to all that have been told “no” in their lives.

If you are local to the greater Cincinnati Area and in need of cleaning or labor services, be sure to reach out to Innovative Labor and Cleaning Services. A list of services can be viewed here and the company can be contacted here. Whether you are returning to society and looking for an opportunity or you have a commercial or residential property in need of services, you can get more information there.