Last night, before the Milwaukee Bucks defeated the Brooklyn Nets 127-104, they received honors for winning the 2021 NBA Championship. Obviously the players receive championship rings, but do you know who else does? Coaches, training staff, sometimes even water boys and cheerleaders get rings. Oh, and of course team owners also receive rings. This include Valerie Daniels-Carter, who is the sole Black woman owner of the team.

Daniels-Carter has an amazing entrepreneurial story and journey. Before becoming the sole Black woman to own a piece of the Bucks, she built her brand in numerous ways. And it all started with a single Burger King restaurant in 1982. Daniels-Carter, president and founder of V&J Foods, is one of the most prominent fast food operators in the nation. Alongside her brother, John Daniels, Jr., the company’s operations have grown into a 38-store operation. 12 units are located in Milwaukee and another 26 units are located in Detroit.

Although Daniels-Carter fast food journey began in 1982, her hustle was born much earlier in life. According to Milwaukee Magazine, Daniels-Carter’s formative years included living with six brothers and a sister. Her first foray into business was walking her neighbors’ younger children to school. “For $1.25 per week, I would walk a kid to and from school every day,” Daniels-Carter said. “I told them there are dogs on the path and lots of other things their kids might be afraid of and I could make sure they got back and forth safely. Thankfully, no one ever tested the waters to see if I really could fight because I couldn’t.” 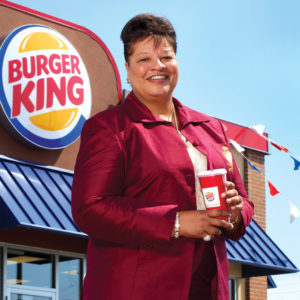 The success of that initial Burger King restaurant was truly only the beginning. By 1998, 32 Burger Kings and 67 Pizza Huts were among V&J’s portfolio. This made Daniels-Carter the head of the largest minority-owned franchise company in the country, Milwaukee Magazine reported. But her fast food empire isn't limited to just these two brands.

In addition to Pizza Hut and Burger King, she has also teamed up with one of NBA’s most famous and valuable players of all time. Daniels-Carter and Shaquille O’Neal have partnered to expand the horizons of Auntie Anne’s famous Pretzels. VJ & O’Neal Enterprises, LLC was established in 2006 by V&J and O’Neal Franchise. VJ & O’ Neal rolled out its first Auntie Anne’s soft Pretzel Corporation into the Eastland Mall in Harper Wood, MI. The next location will open in Saginaw, MI at the Fashion Square Mall. By next year VJ & O’Neal Enterprises, LLC will have opened thirty new Auntie Anne’s locations nationally. Shaq is a master franchiser in his own right. He will be a guest at Black Entrepreneurs Day this coming October 24th to talk about his many successes.

So how did Valerie come to be an owner of the NBA Champion Milwaukee Bucks?

Well she has always had a passion for sports, especially basketball. After all, she grew up on the Northside of Milwaukee when Bucks drafted a 7-footer out of UCLA named Lew Alcindor. In 1971, Alcindor (now Kareem Abdul-Jabbar) led the Bucks to their then lone NBA championship in franchise history. For Daniels-Carter this was an “electrifying time” in the city’s history.

She also used to play basketball herself in high school and in college at Lincoln University. Daniels-Carter was even drafted by the Milwaukee Does. She then went on to help form Partners for Community Impact. This is a group of diverse community investors and together they went on to purchase a minority stake in the Bucks in 2014. But the Bucks aren't the only team in Wisconsin she's involved with. She also sits on the board of directors for the Green Bay Packers.

Daniels-Carter shows no signs of slowing down either. She is still very passionate about growing other Black women into entrepreneurial roles and uplifting them. Valerie is a devout woman of faith and gives empowering motivational speeches to her community. She also received Honorary Doctors of Humane Letters from Cardinal Stritch University in 2008 and Lincoln University in 2016. She has been recognized by Essence magazine as one of the 50 most inspiring African-Americans in the U.S. And in 2020, Black Enterprise Magazine awarded Dr. Daniels-Carter the Legacy Award and recognized her as being a part of the 50 most Inspiring Women in Business. Also in 2020, in her home State of Wisconsin, Biz Times Media honored and presented to her the “Bravo! Entrepreneur Award of Lifetime Achievement.”

“I'm God-made. I have been blessed to work all of my life. When I started on this journey, I had a mission, and I have been able to achieve it.”