“Growing up in Detroit, I knew nothing was going to be handed to me. I expected doors to be closed and knew I would need to work hard and never take ‘no’ for an answer. I’ve heard ‘no,’ but I haven’t let that stand in my way. There is always a way forward.” – Nailah Ellis-Brown on her Detroit mindset contributing to her business success.

Detroit native Nailah Ellis-Brown credits her hometown with her tenacious business attitude. It has been over a decade since she originally launched Ellis Island Tea from her parent’s basement, but the recipe has been around for centuries. All the way back to when Pop Ellis first worked it up. And while he was happy to share his refreshing Jamaican tea with anyone who was thirsty, he made it clear his recipe was to be “sold, not told.”

Ellis-Brown is the CEO of Ellis Infinity Company, which she founded in 2008. Ellis Infinity is the manufacturer of Ellis Island Tea. Ellis Infinity operates out of a 4,000 square foot production facility in Detroit. It is across from the Russell industry Center. This area was once home to auto manufacturing, but is now becoming home to more creative endeavors. And in addition to producing the Ellis Island Tea, Nailah also offers co-packaging services to other beverage companies. 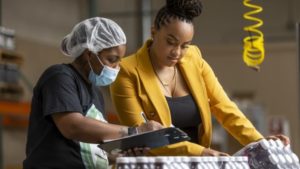 Nailah overseeing day to day functions at her Detroit brewing and bottling facility.

Ellis Island Tea is an all natural, antioxidant rich tea. Although the smooth Jamaican blend is brewed and bottled in Detroit, it can be found in stores all across the country. And selling things is not new to Nailah. She's been a hustler since childhood. Her entrepreneurial journey started at an early age. When she learned the word inventor at school something inside her lit up. She remembered how exciting it was when speakers would come into her elementary school. One speaker who shared their story was an inventor. Something about the idea of inventing excited the young Nailah.

“I always sold everything, candy, chips, juice,” she said. “I knew then that entrepreneurship was for me.” Combining the gift of invention with her gift of selling, she was already forming the backbone of what it takes to be an entrepreneur. Driven and inspired by a family recipe, her Jamaican Sweet Tea has been passed down throughout the years. Beginning with her immigrant great-grandfather who came to America through Ellis Island. He was a master chef for Marcus Garvey’s Black Star Line.

It wasn’t so easy at first. Nailah had to test out different ingredients and then learn how to take those ingredients to scale. She made it every day for an entire year before she felt it was good enough to sell. First, the color was off. Then, the materials weren’t right. Adding raw herbs and keeping everything natural felt right. And once she got it just right, Ellis-Brown began selling bottles of tea from a cooler in the trunk of her car back in 2008. 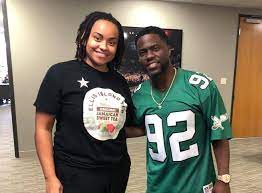 But she has come a long way from basements and trunks. In 2014, she opened her first beverage production and co-packaging facility in Detroit. This lead to her landing numerous commercial accounts.  Through partnership deals with major retailers and after winning Centric TV’s reality competition show Queen Boss, Ellis-Brown’s Jamaican-inspired line of naturally sweetened hibiscus tea beverages has caught the attention of Beyoncé, Facebook COO Sheryl Sandberg, and even received investment from Kevin Hart.

To lock in that investment, she recently traveled to Trinidad and Tobago to negotiate a deal with a major bottler that could help overhaul the company’s production. With that, Ellis Island Tea rolled out into Walmart and later debuted in Target and CVS. With Hart’s backing, sleek new packaging, competitive pricing, and new e-commerce options, the growth was endless.

Since the partnership with Hart Ellis-Brown’s business has been thriving. She also was able to ink a deal that landed her family recipe in every Sam’s Club across the nation. This added to the list which includes more than 1,500 stores such as Whole Foods, Meijer and Kroger. And her tea is also in high-traffic airports nationwide, in niche markets and online. Nailah also has her family tea in evert single Target location across the U.S. as well. And Ellis-Brown couldn’t be happier to run one of the largest Black-owned beverage company in the states.

Now a resident of Atlanta, Ellis-Brown still runs her business out of Detroit to help pay it forward to the city that raised her. Today, Ellis-Brown is one of the largest woman-owned beverage companies in the U.S and one of the few—if not only—Black women to own a manufacturing plant. Ellis Isle remains on the cutting edge of innovation in the beverage industry. Her newest product, Wet Shuga, uses cold-pressed cane juice as a sweetener. The cold-pressed juice is not only a healthier alternative to the standard sugar, but it also offers the company an opportunity to engage the cane industry and its under-resourced farmers—a passion of Ellis-Brown’s.

“What does our growth mean for Detroit? Employment. I can hire more Detroit natives. A lot of people are claiming they can rebirth or save the city but it’s not always helping Detroit natives. am working with people born and raised here. That’s what Detroit needs.”