Paulla McCarthy, a single Black mother in New York, is the owner of a spring water bottling plant. In addition to to owning the plant, she also owns the land from which the spring water is obtained. No other woman in the state of New York has ever done so. McCarthy's water entrepreneurial journey actually began with her twin sons. On their 20th birthday, the young men started a water distribution company called New York Water Boys.

The Covid-19 pandemic began ravaging throughout the country, forcing the twins to start water home deliveries. Several bodegas became customers, and eventually, they landed a contract with 21 local supermarkets. This was what prompted McCarthy to start looking into the water industry. She saw an opportunity that could further her commitment to financial literacy and to her philanthropic efforts.

When thinking of the earth's valuable natural resources, most think of gold and gas and oil… yet we forget about the natural resource that our body's actually need. Not only is water essential to life, but it also actually a scarcity on this trillion dollar resource.

As the boys success continued to grow, McCarthy asked the supermarkets if they would carry a private label water brand to support her nonprofit.

Youth Savings Society (YSS) is a financial literacy and education program for students in K-12 grades. They loved her story, purpose, and agreed to carry her water. This prompted her to seek out a water company on the Department of Health website, based on its water quality, and set her on a trip to taste the water. In May 2020, Paulla and her children met the original water plant owners who eventually offered to sell her their 15 acres of land.

Water globally is becoming increasingly scarce and the fight for control of drinking sources has led experts to predict that water will become more valuable than gold over the next 50 years, according to a report on Black Wealth News‘ website. The resource is becoming so sought after that McCarthy has been offered over $20 million from major water companies to sell her property. She has continually declined the offers and is steadfast in holding onto the company. She believes in the importance of Black ownership of natural resources and wants to rewrite the narrative.

“I'm not going to sell. I want to change and move this narrative that we don't own anything.”

Another reason she is against selling is due to the lack of independent companies in the industry. With so many huge corporations attempting to monopolize the industry, McCarthy understands the power in holding her company. 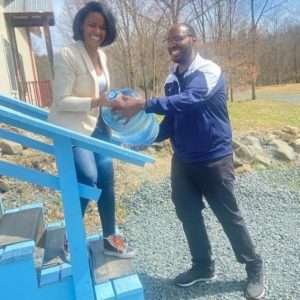 According to the World Health Organization, 2/3 of the world does not have access to clean drinking water. With the rise of the corporate monopoly on water, chemically-treated and adulterated water has become the standard in our accessible water options.

To combat this problem and bring the community the best in natural spring water, YSS WaterWorks is launching a 3 Million Gallon Challenge.  This is an effort to pre-sell 3,000,000 gallons of water within the next 30 days and bring access to the hands of the millions in our community. You can contribute to this campaign by preordering a gallon of water on the YSS website.

If you would like to keep on top of Paulla and her efforts, make sure to check out her nonprofit organization Youth Saving Society. She also keeps her followers informed through her Instagram page. Paulla sat down and gave an interview with the Earn Your Leisure podcast last month and spoke about her inspiration and transition from nursing into becoming a complete water bottling business owner. The video of the interview can be viewed here.