Once again we have another story of a need becoming an asset. Philomina Kane and her natural hair journey has transitioned into an entrepreneurial one. Eight years ago, Kane was an undergrad student at Princeton University majoring in biology. As many college students can attest, the pressure was getting to her. So she cut off all her hair, and as her natural hair regrew, her head needed some additional comfort and protection.

“I found myself always putting a scarf on before putting a hoodie on. One day I was like, you know what, I’m going to make satin-lined hoodies.” – Philomina Kane tells Shark Tank.

Part of that journey was starting her own clothing line, KIN Apparel. The title, an acronym for “Keeping it Naturally,” has a double meaning tying back to her family roots. “I was raised in Ghana by my grandmother for the first five years of my life,” said Kane. “She taught me about my Ghanian culture, which I've grown to love so much.”

She has been able to incorporate traditional designs into her sweatshirts, which have become the cornerstone of her success. The hoodies are made intentionally to protect natural hair. Traditional hoodies are made with cotton. That material absorbs the moisture in your hair and can leave it dry and frizzy. Kane started lining her hoods with satin. This small subtle detail allows your hair to retain its moisture. The inclusive design appeals directly to women whose natural hair had previously not been addressed by other clothing brands. In addition to the built-in hair care, the hoodies are adorned with traditional African patterns and designs.

Kane started KIN Apparel with just $500. And she has already surpassed $350,ooo in annual sales. KIN Apparel has soared in popularity via social media. And due to the soaring sales and popularity, she landed an opportunity to appear on the hit television show Shark Tank. And it was during this appearance that Kane landed an additional $200,000 investment. Shark Lori Grenier and guest Shark Emma Grede, invested the $200K in exchange for 30% of her company’s equity. Shark Mark Cuban, who passed on the deal, recommended that Kane work with an investor who can complement her inventiveness and creativity with practical business advice. 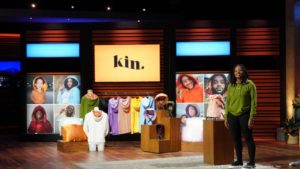 Upon landing her deal, Kane started to cry. When asked why by a judge, she said, “I’m crying because I’m so happy.”  After welcoming the judges to “the KIN Folk,” she told viewers, “this is to tell you to follow your dreams. Follow your passion. If you have a passion, go for it. Don’t let anybody stop you.”

Grede, the founder and CEO of denim-brand Good American and a founding partner of Kim Kardashian’s shapewear-apparel line SKIMS, said she was primarily drawn to Kane’s story and identity. “Retailers are looking for Black female founders,” she said, adding that Kin Apparel’s broad, diverse audience “has a huge window of opportunity.”

As a Black woman who takes pride in her hair, exposing it to the wrong kind of fabric can make your break your mane. Literally. Through KIN Apparel, Kane hopes to bring quality clothing to people invested in their haircare routine.