When it comes to finances, there are three type of professional athletes. There are guys that blow at all and end up broke. There are guys that manage themselves and are able to live comfortably and sustain themselves. And then there is the group that Shaq is apart of. We all know who Shaquille O'Neal is. We all know the monster LSU standout that went number 1 overall to the Orlando Magic. The 3 time champion Los Angeles Laker. The additional championship with the Miami Heat. We know what Shaq has done ON the court. But how much do we really know about Shaq's off court moves?

The third group of professional athletes are those that use their money (and fame) to build even more income post career. This can be done several ways. I remember several years ago, back when Shaq was still a Laker, a mentor of mine asked me if I knew the difference between being rich and being wealthy? I thought it was the same thing. He told me, “Shaq is rich. But the man that writes his check is wealthy.” That blew my mind. I never even thought about things is those terms. We were conditioned as children to grow up to be Michael Jordan… with know knowledge of who Phil knight even was. What can athletes do post career to go from being rich to becoming wealthy? How Shaq moved reminds me a lot of the mentality of Jay-Z and Nas and how they made bigger moves post rap.

Shaq began pivoting his financial moves while he was still pivoting in the paint. While he was still playing, Shaq turned down a $40 million endorsement deal with Reebok. Instead of allowing someone to write his checks, he made a decision to become the check writer. And he pulled a bit of a Jerry Maguire when he did so. When starting the Shaq shoe brand, he hired on some of the designers that worked for Reebok to come with him in this new venture. This was savvy business move for a couple of reasons. He knew that his shoes weren't competing with Jordan's in the stores. Even though they were priced less. Shaq often tells a story about a mother that cursed him out for selling such expensive $100 shoes. So he decided to start marketing his shoes to a different audience.

Shaq changed his business model because he wanted to offer a more affordable shoe. The price point of his signature shoe took a significant drop. His new line of shoes were $60 to $70 cheaper than his Reebok line. Shaq made the price family friendly. Since starting his own line in the late 90’s, he's sold over 400 million pairs of shoes. What started as a sacrifice evolved into a win-win situation. Mother's were able to purchase an affordable shoe that was endorsed by an NBA great, and the money he sacrificed in profit margin was regained courtesy of volume sales. And not to mention the fact that now he was the owner and not merely the face, he made much more in the long run. 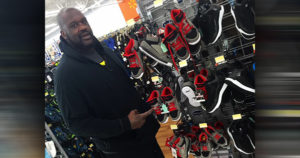 Shaquille shoes off his “Shaq” collection at a local Walmart store.

Instead of competing to be one of many at Footlocker and Champs, he inked a deal to be the big fish of his own pond. “I went to my favorite store, Walmart, and we did a deal. I was in all stores and my price point for the shoes was $29-$19 and since then we sold over 400 million pairs,” Shaq told the Full Send podcast earlier this year.

And this is just one of the many post NBA moves that Shaq has made. Shaq has hardly been shy about his investments. Shaq has been involved with multitude of businesses throughout the years. According to Money.com, he once owned 155 Five Guys restaurants. Earlier this year he joined the board of directors at Papa John’s, while also becoming one of the leading brand ambassadors. Auntie Anne’s and Krispy Kreme donuts are other food companies which been the beneficiaries of Shaq investments. The Hall of Famer has also invested in gyms and car washes. And previously held a share in the Ring doorbell company prior to Amazon’s $1 billion buyout in 2018. And how can we possibly forget his long-standing relationships with Icy Hot and Gold Bond.

Shaq is actually going to be sitting down and discussing his business savvy October 14th for the second annual Black Entrepreneurs Day. The creator of Black Entrepreneurs Day, Daymond John, will sit down with various Black business owners and celebrities as apart of his segment called Game Changer Conversations. This will be the second year that Shaq has participated.