In an article written last year according to Forbes magazine, Black women were among the fastest growing groups launching and owning new businesses. Tenisha Williams, CEO of Elite Realty Partners, is apart of that fast growing phenomenon. She has established and grown the largest Black woman owned real estate brokerage firm in the Miami area. And at this point, has passed over $200 million in sales in just over two years. A graduate of NBCU Florida A&M University, she founded her brokerage firm in 2018.

Williams, a former county worker, knew from the onset that she was not there to stay. While fellow employees were content with great benefits and the future hopes of retirement, her sights were set on higher aspirations. In 2017, during a mother-daughter trip to St. Lucia, she was settled after speaking with her husband that she was not returning to work. She was convinced that she found her purpose through the love of real estate, and she had made her first six figures working part-time. And it's very fitting that she had this epiphany while on vacation with her daughter. Pregnant at the age of 15, she was determined not to abandon her daughter or her dreams. When she went to college at FAMU, she took her daughter along with her. There, she became a full-time student and single mom.

Williams says that she is more than a CEO. She considers herself a coach at heart. She pours into her team by keeping them pumped and empowered to achieve their goals. Her passion to help and develop other agents are innate. However, the ability to manage so many personalities synergistically was initially a struggle. As a former correctional officer and teenage mom, her strong personality seemed curt at times. She quickly learned to master the right delivery in communication and messaging without hurting or offending others in the process.

“I help families and real estate agents prepare for life's next chapter.” 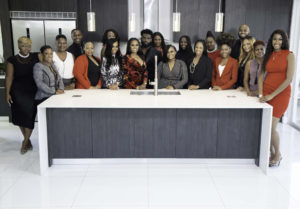 Elite Realty Partners is considered a godsend to many of the agents and customers. There has been an abundance of customers and agents breaking through various hardships and setbacks, bouncing back to victory with the help of the brokerage. For example, some agents did not sell one house at their former brokerage, and after coming on board with Elite have become top producers selling millions in real estate. She solely attributes her faith to the achievements of her company’s rapid success.

She did not even realize that she had hit the $200 million milestone. Remaining focused on her 2021 goals, she was not paying attention to her lifetime achievements. “I just happened to pull the report recently and I remember just being in disbelief.”, says Williams to Black Enterprise. She also attributes having access to the right tools and resources to her continued success. On her personal website, she offers coaching classes and access to a free home buyers guide. Her own team consists of over 150 real estate agents.

Currently Elite Realty Partners only services the South Florida area, but Williams is planning on expanding in the future. She remains focused on having her current market operating at full potential before moving into new areas. By keeping her agents motivated and inspired through building a family culture, Williams has become one of the top firms in her area. And she is doing so with almost no marketing efforts. Her business model and reputation cause agents to keep filing in. The benefits of building a culture like this are plain to see. The friendships that have been established, the collaboration of agents, the joys of winning together help everyone succeed.

“The pressure is unimaginable. Sometimes I cannot sleep at night because my brain will not stop thinking of ways I can add more value to my team. I truly am invested in their careers, so I take the responsibility seriously. This is not a task for the weak at heart.”

As the head of the largest Black woman-owned brokerage firm in her area, Williams remains humble, grateful, and thankful to the Lord for being chosen and entrusted with such a huge role. Her mission is to change the narrative and diversify the faces in real estate throughout the Miami/Fort Lauderdale area. She and her team are always ready to do the work and reap the rewards that lie in the days ahead.