What did the NBA All-Star Game mean for HBCU’s?

The NBA has been at the forefront of the push for social change in the media over the last year. It has now been just over a year since the nation was rocked by the killing of Breonna Taylor in her own home. Breonna was just one of many high profile Black men and women shot, killed, choked, beaten and/or killed by police officers in 2020. The outrage behind this repeated police brutality was felt throughout the nation, and the world. The NBA was probably the highest profile organization that attempted to address the injustices.

As the nation was trying to move forward from shutdowns and viruses, NBA players would not allow business as usual. Many players were against playing while injustices and atrocities continued being perpetrated against the Black community. The NBA reopened in “the bubble” of Disney World in Orlando, Florida. But with social change and reform at the forefront of the NBA Playoffs. In a similar effort, the NBA used the All-Star Game in Atlanta this year to highlight HBCU's and celebrate their importance.

Adam Silver, commissioner of the NBA, pledged that the NBA would donate $3 million dollars of the proceeds that the All-Star game would generate to HBCU's. But the actual value to those schools will far exceed that influx of cash, with almost every element of the All Star Game set to showcase and celebrate HBCU traditions and culture.

Adam Silver, commissioner of the NBA, pledged that the NBA would donate $3 million dollars of the proceeds that the All-Star game would generate to HBCU's. But the actual value to those schools will far exceed that influx of cash. The true value is with almost every element of the All Star Game set to showcase and celebrate HBCU traditions and culture.

“It’s no different from Super Bowl commercials. People spend millions of dollars to put their commercial on the Super Bowl for the exposure. And, you know, the exposure we’re getting this weekend from the NBA All-Star Game, it only can help.” – Mo Williams, former NBA player and current coach at Alabama State 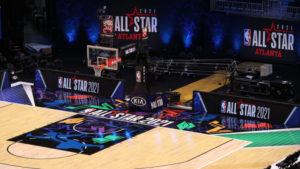 The court was designed in collaboration from artists who attended HBCU schools. The design represents both the academic significance and the incredible pride and school spirit of HBCUs and their students. Created with HBCU alumni, it incorporates icons representing the best of HBCU academics, music and campus life.

The famed bands from Grambling State and Florida A&M will perform during the player introductions. Clark Atlanta University’s Philharmonic Society Choir will perform “Lift Every Voice and Sing,” commonly called the Black national anthem. Gladys Knight, a graduate of one of the nation's oldest HBCUs in Shaw University, will sing “The Star-Spangled Banner.” The refereeing crew of Tom Washington, Tony Brown and Courtney Kirkland all are HBCU graduates.

Each team played for quarterly donations. With whichever team scoring the most points in a given quarter scoring a donation for respective Black college scholarships. Captained by LeBron James and Kevin Durant, each represent one of those groups. The winning team in each of the first, second and third quarters collected $150,000 for their organization. The first team to hit the target score and win the All-Star Game will get the final $300,000 in scholarship funds. Team LeBron represented The Thurgood Marshall College Fund and Team Durant played for the United Negro College Fund. Both funds are non-profits that look to award scholarships and support HBCUs. Team Lebron took a clean sweep of the event and scored a total of $750,000 for his group.

The game and festivities around the All-Star game were different this year. Generally many of the events that usually take place over a series of days took place in one night. Fans still got to see the amazing dunks, smooth passing and effortless three-pointers. They also got a look into the what HBCUs have to offer. 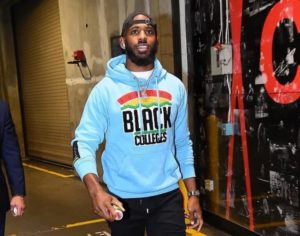 The NBA has just one active player who had the traditional HBCU experience, Portland’s Robert Covington. Covington attended Tennessee State. He was invited to be part of the skills challenge. This challenge preceded the game but is typically part of All-Star Saturday night. Amid the pandemic, the events were condensed to one night this year. All-Star Chris Paul, the NBA's President and a longtime proponent of HBCUs, played his college career at Wake Forest. Now Paul is finishing his degree at Winston-Salem State.

Generally, the nation's top recruits attend traditional powerhouse NCAA schools as opposed to the less publicized HBCU's. Some top basketball recruits have said they were considering bucking offers from traditional powers to attend HBCUs. Pro Football Hall of Famer Deion Sanders was hired as head coach at Jackson State. The school gained instant notoriety. And as the first half of the NBA season wound down, LeBron James of the Los Angeles Lakers played in a pair of sneakers that paid tribute to Florida A&M, a school that just finalized a six-year deal with Nike to play in James’ line of uniforms, apparel and footwear. This years All-Star Game looked to provide more boosts for these schools.

There are more than 100 HBCUs across the US, according to the National Center for Educational Statistics. Most of them were formed after the Civil War to provide educational opportunities for enslaved people who were now free. While they represent about 3% of the higher education institutions, at least 17% of bachelor's degrees by Blacks come from HBCUs, according to the United Negro College Fund.
The true impact on what this year's All-Star Game had on HBCU's probably won't be felt immediately. But players like Paul, Covington and James all hope that the long term ripples will be felt for decades to come.